Although eCO2 had no significant effect on stomatal conductance in Phragmites, our observed changes in photosynthesis are in accordance with the optimal stomatal behavior defined by Cowan and Farquhar (1977), which is related to ITE (instantaneous transpiration efficiency, the ratio of net photosynthesis to transpiration, which was used to test the efficiency of resource use by reed plants and its relationship with atmospheric CO2 concentration). Therefore, ITE should increase in proportion to atmospheric CO2 when plants are exposed to eCO2 (Barton et al. 2012). In our experiments, the 46% increase in atmospheric CO2 (from 399 to 583 µmol mol-1) and the 38 to 44% increase in average ITE were in accordance with the reported performance of this FACE (Sánchez-Carrillo et al. 2015). Based on the theory of optimal stomatal behavior, our results predict a distinctive response of reed plants exposed to eCO2 that depends on water availability (or hydroperiod): during wet periods reed enhances stomatal conductance and carbon uptake increases regardless of atmospheric CO2 concentration; contrarily, dry cycles induce stomatal closure in reed, but this reduction is lower in plants exposed to eCO2, increasing significantly carbon uptake compared with those growing at current CO2 concentrations. If these dynamics predict wetland behavior at the ecosystem-scale, then the responses of emergent macrophytes to long-term eCO2 could be even more complex, given the relatively large seasonal and annual fluctuations in water level in most freshwater wetlands, particularly in semi-arid zones. 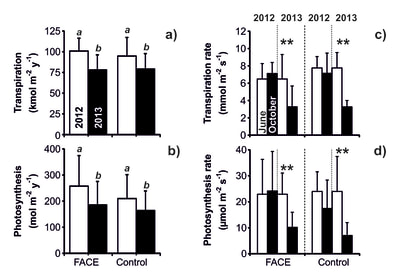 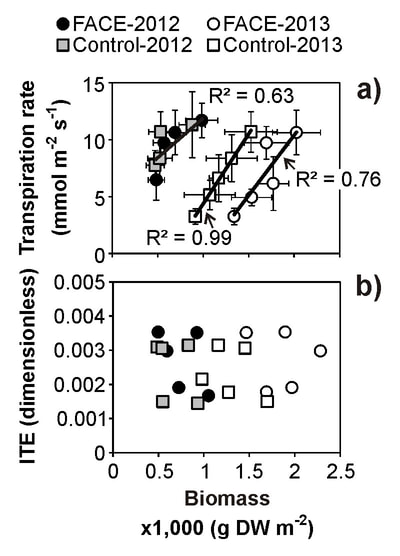 Probably our most interesting result is that there was increased soil organic carbon in plots exposed to eCO2. This suggests significant carbon losses from roots, and may partly explain the lack of increased growth and carbon accumulation following eCO2. The ability of roots to secrete a vast array of compounds into the rhizosphere is one of their most remarkable metabolic features. Plants may release up to 20% of photosynthesis products into the soil, and this provides the basis for establishment of plant-microorganism interactions that benefit plant growth by increasing the availability of minerals, production of phytohormones, degradation of phytotoxic compounds, and suppression of soil-borne pathogens (Bais et al. 2006). Some other studies reported that root exudation plays a major role in maintaining root-soil contact in the rhizosphere because it modifies the biochemical and physical properties of this environment due to fluctuations in hydration, and thereby contributes to root growth and plant survival (Walker et al. 2003). Vascular species under eCO2 have increased carbon release due to enhanced root exudation of carbon and root turnover (Fenner et al. 2007). When aquatic plants, such as Orontium aquaticum, Equisetum fluviatile, and Phragmites communis, are exposed to eCO2 they also exhibit increased photosynthetic rates, but not Abiomass because of the increased root exudation of organic carbon (Megonigal and Schlesinger 1997; Ojala et al. 2002; Kim and Kang 2008). Some FACE experiments in rice fields demonstrated that the increase in soil-labile carbon regulated microbial activity, which in turn increased mineral transformations (Guo et al. 2012). It is likely that this was also a main effect of root exudation of carbon in our FACE experiment (unpublished results). It seems that water stress is responsible for the increased root exudation of carbon under eCO2, because similar responses were reported in several other aquatic plants, such as Vallisneria americana, Juncus bulbosus, Phragmites australis, and Typha latifolia, when they are in stressful conditions, including low level of light, increased acidity, and exposure to xenobiotics (Chabbi et al. 2001, Kurtz et al. 2003, Larue et al. 2010). It remains to be determined whether the sudden change to eCO2 or flooding had the more significant effect of the reed plants. It is also unknown whether this plant response will be maintained as the plants age, another important issue related to the long-term dynamics of wetlands. These effects may be important in the context of wetland function, because they affect wetland soil biogeochemistry and the potential of wetlands to act as carbon sinks in a future with increased atmospheric CO2. 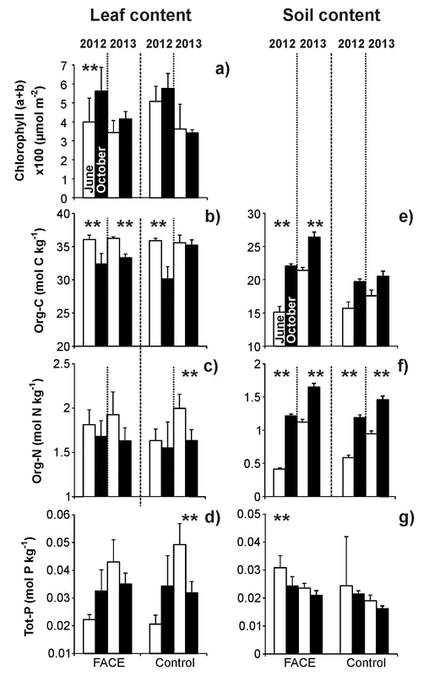 Average levels of chlorophyll (a+b) (a), carbon (b), nitrogen (d) and phosphorus (d) in Phragmites australis leaves and organic carbon (e), organic nitrogen (f) and total P (g) in soil at the beginning (June) and the end (October) of the growing seasons in plants exposed to eCO2 and control (ambient) conditions during 2012 and 2013. **: p < 0.05, in a Bonferroni post hoc test of the Factorial ANOVA plot type × month.